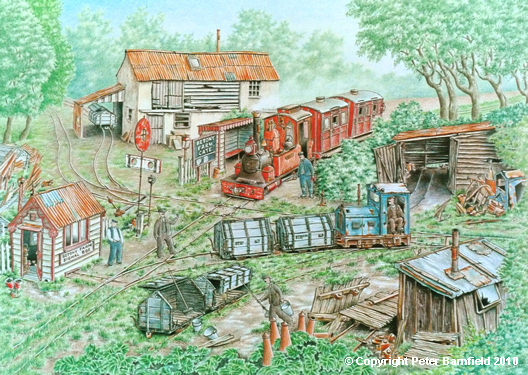 Where the PBLR line from Portersfoote Bunting to Bradforde Longflap crosses the Betony Tump Rhubarb & Mushroom Rly. there is a small station called Betony Farm Gate. This level crossing of two lines is controlled by a large disc & crossbar signal, or by men waving their arms about. The small diesel engine has just collected two mushroom wagons from the packing shed and is about to shunt them out onto the running line so that the passenger train can propel them to Portersfoote Bunting. The PBLR rule book forbids this but the men find it a more convenient way of working than attaching them to the rear of trains as specified. The lines disappearing to the left and right of the picture lead to mushroom sheds and to extensive rhubarb plantations.