Are you still painting?

How long does it take you to produce a picture?

Where do you get your ideas?

Are there real people and places in your pictures?

Why does there seem to be a cat in most of your pictures?

Why the name Steam Pencil?

Are you still painting?

Sadly, Peter died in 2018 at the age of 75 so, while he may well still be painting somewhere, we are currently unable to show you this work! The remaining questions are answered in Peter's own words.

How long does it take you to produce a picture?

It really is impossible to generalise because it all depends on the size and complexity of the picture and how well it goes. If there is a lot of fine detail, or if I need to invent something from scratch such as a strange machine which could actually work, this can take a lot longer than a straightforward scene where there is a minimum of creativity and where the process can often be more technical in nature than anything else.

I tend to produce mixed media work in three standard sizes 23 x 31cm, 31 x 44cm and 42 x 60cm, scaling up from a very small pencil sketch. As I work mostly on an A1 size drawing board anything much larger than this becomes unmanageable. If all goes smoothly then a fairly complex picture in the largest size can take up to 30 days to complete. Acrylics on canvas can be larger but they are painted on my studio easel and the subject matter is quite different so these rarely take longer than two or three days.

Where do you get your ideas?

Ideas usually come out of the blue, when one least expects them and I think one needs to be fairly relaxed about it. On the other hand it can be a question of sitting down, writing some notes, producing a few doodles and hammering away until something emerges. These ideas are rarely as good as those which come spontaneously but if you are working on a series, rather than producing one-offs, itĺs sometimes necessary to work in this way to maintain a theme, although one picture often leads you straight into the next. Iĺve rarely had a problem finding subject matter but do suffer from the dreaded block very occasionally, in common with most creative people. 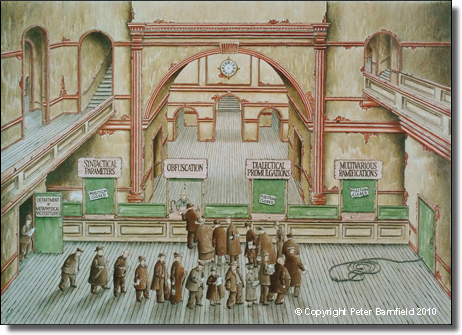 Sometimes the title of a picture comes into my head for some reason or other and I may write it down and then when I can Ĺseeĺ the picture in my mindĺs eye it finds its way onto paper. Titles can sit around for ages without a picture ever being started because I canĺt visualise the final design.

Typical of this was The Department of Metaphysical Vicissitudes which waited for some years before I made a start on it. The actual building featured is a complete figment of my imagination and is nothing like my original concept, scribbled on the back of an envelope.

The Wellington Boot Tread Cutting Company came into being when, in the heart of Devonshire one day, I came across this actual building. It has been portrayed with various additions and alterations, needless to say, but the basic place and its surroundings are more or less as found. Before I could letter up the factory sign however I had to come up with a title, so went for a walk and it just came into my head when I was thinking about a completely unrelated subject! 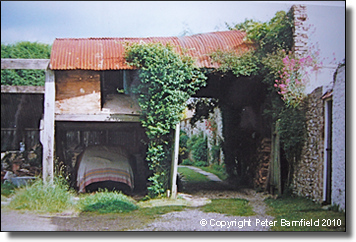 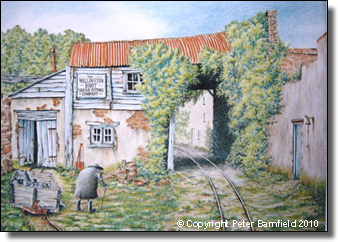 The business of titles can be a problem, particularly when dealing with a series which could number 100 images. If Iĺm stuck for a title I usually appeal to my wife Ginny, who is very good with words. It was she who came up with the city of Barlam Gowling, an anagram of global warming, which she felt applicable to the not so nice side of my work. 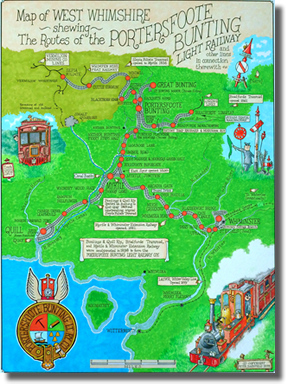 Whimshire is fictitious of course but seemed the right location to choose after someone remarked about my portrayal of ôrailway whimseyö.

Thanks to Google Iĺve found that the county existed in a 1950s/60s newspaper cartoon strip featuring Colonel Pewter and drawn by Australian Arthur Horner. Apparently some of these adventures appeared later in book form including a Penguin of 1978 entitled Three Whimshire Stories.

Iĺve not seen any of the Colonel Pewter books but hopefully the map of West Whimshire which I created some years ago, and where my pictures are set, doesnĺt stand on the good Colonelĺs toes.

My actual chosen location is somewhere in the West of England and includes elements of Devon, Cornwall, Somerset, Dorset and Wiltshire.

Are there real people and places in your pictures?

Real people are rarely depicted unless suitably disguised so that they hopefully wouldnĺt recognise themselves although retaining their basic characteristics. Occasionally a recognisable friend appears somewhere and I sometimes include myself, or at least someone a little like me and similarly my wife Ginny. 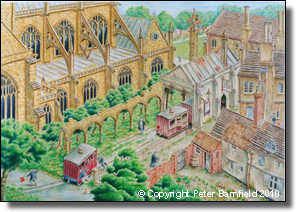 As already mentioned with The Wellington Boot Tread Cutting Company, real places are occasionally adapted to suit a picture. The PBLR Cloisters railway terminus at Whiminster for instance, (right) is shown alongside a building not unlike Sherborne Abbey in Dorset, although the grassed area beyond the church is more reminiscent of Wells or Salisbury. The real Sherborne Abbey is shown on the left. It had taken me some years to find the right location for this picture and even when I did there was no way of elevating myself to the required height above the scene so lots of photographs were taken from ground level and plenty of artistic licence was used. The actual cloisters themselves were built by the railway company so that the station would blend in with the surroundings!

I think itĺs true to say that, generally speaking however, the locations for most of my pictures are straight off the top of my head. I do tend to carry a small camera with me, and if I see anything of interest, such as a decorative wall bracket, an old lamp or some architectural feature which appeals, then it gets bagged and might turn up in a picture years later. There is a filing cabinet in my studio which contains many hundreds of photographic prints, subdivided into various themes such as cottages, mechanical details, architectural details etc.

Why does there seem to be a cat in most of your pictures?

Well, I like cats and since that excellent artist Terence Cuneo featured a mouse in all his paintings I thought it would be good to continue the tradition, so to speak. The actual ginger cat normally shown answers to the name Wardle, after the firm of steam locomotive manufacturers Manning Wardle of Leeds. For some years we havenĺt actually had a moggy but were often visited by a neighbourĺs cat named Jazz, 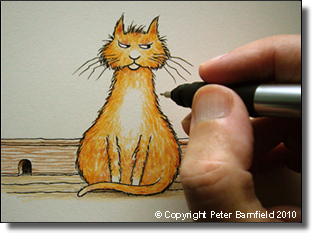 found behind a pub which is locally famous for its jazz sessions.

Jazz would sneak into our house, make straight for my studio and suddenly appear on my drawing board, making me jump a mile. I think the real attraction was the vertical blinds, which apparently had lots of play value, much to the detriment of the blinds themselves!

My cat is probably based on Jazz and even features on the PBLR coat of arms. The story goes that he is one of a semi-feral breed found only in Whimshire, which neatly explains how he can be found in so many different locations. Apart from a cat there is usually also a mouse hole in each picture! Cats only seem to crop up in my humorous pictures.

Why the name Steam Pencil? 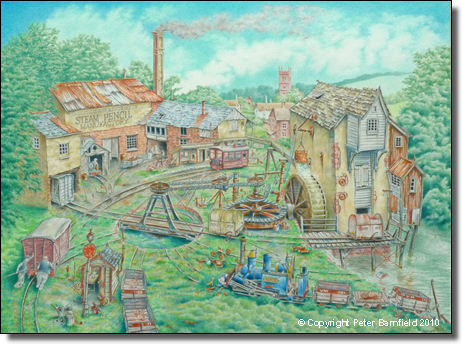 This was the name of our range of greetings cards (1995 - 2017) and refers to the Steam Pencil Manufactory at Bradforde Longflap in Whimshire. Artistsĺ pencils were made here and although the plan had been to power the works with a large steam engine, it was found cheaper and more convenient to use a waterwheel instead. Because the word Ĺsteamĺ sounded more progressive to the Victorian promoters however, it was retained in the companyĺs name.

The actual name Bradford Longflap was prominently printed on an A4 manilla folder that just so happened to be lying in my studio when I was working on this picture. I thought this made a good village name, although an Ĺeĺ was added to the end of the first word in order to make it more olde.