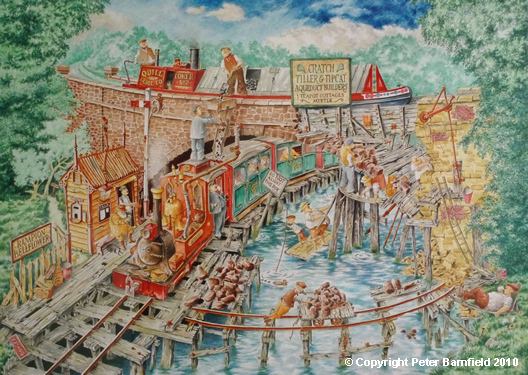 The Myrtle Canal had crossed the river on a fine stone aqueduct at Rampion Bellflower and all was well until the railway arrived, undermining the foundations by building its line and a station along one side of the arch and upsetting the watercourse. Despite heroic efforts by the Girth Bros. (Builders, Decorators and Undertakers, 3 Pie lane, Portersfoote Bunting) who spent years patching and propping the failing structure, it was eventually decided to rebuild it completely, using a specialist company. A new station and railway line was constructed out on timbers above the river. The canal was then temporarily contained within a wooden trough so that the old aqueduct, the remains of which are on the right, could be demolished and a new one built simultaneously. All this was accomplished without interrupting the flow of traffic on railway or canal! The Quill Coal Co. has fixed a chute to the side of the new aqueduct enabling supplies to be easily transferred to trains below. An unofficial but very convenient pipe, from the railway company's point of view at least, permits locomotives to replenish their water tanks from the canal.