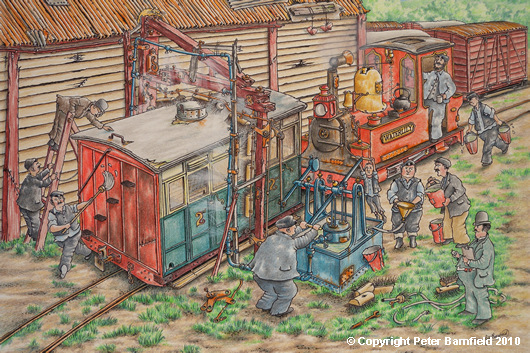 Having had numerous complaints from passengers about the less than pristine state of its carriages, the PBLR designed and built this equipment which was bolted to the wall of the carriage shed at the Company's headquarters. One of the locomotives was renamed Waterlily, had its cab roof ventilator removed and its chimney top hinged so that it could pass beneath the scrubbing brushes. Although reasonably effective at cleaning roofs and sides however, the equipment failed to reach the ends of the carriages, which had to be given the traditional mop and bucket treatment. The apparatus was dismantled after it was discovered that its frenetic gyrations were in danger of demolishing the side wall of the carriage shed.