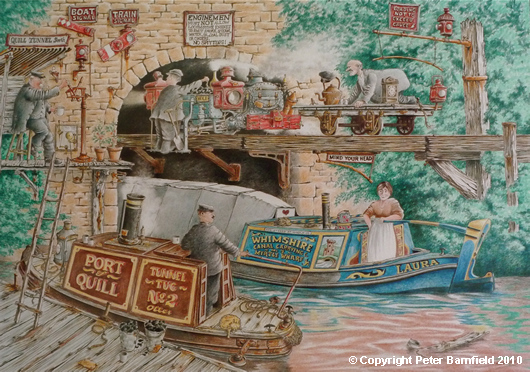 At the port of Quill the Myrtle Canal was originally linked to the river below by means of a unique boat lift (card W31). When this became worn out another, equally unique, boat lift was built to replace it. However, this lift is situated some way up river, nearer the Town Quay, previously served only by the railway, which had tunnelled beneath the hillside. A surprising agreement between rail and canal companies saw the enlargement of this tunnel, which was then flooded to facilitate the passage of boats. Rail traffic is now carried on a sort of shelf, bracketed to the side of the tunnel, and operated by specially designed very low locomotives. As there is not room for a towpath, steam tunnel tugs are provided to haul horse boats. Although it is not desirous for anyone entering these sulphurous depths to meet anything coming the other way, the complex signalling provided to guard against this is not always as dependable as might be hoped.