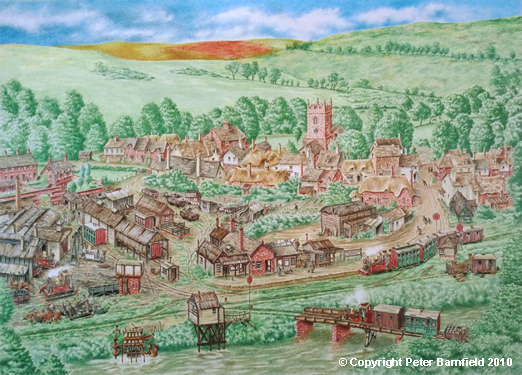 A Great Bunting to Whiminster train runs into the platform as passengers hurry along Station Road. The connecting Bradforde Longflap mixed train waits on the bridge over the River Bunting. It will pull onto the main line before reversing alongside the other train to transfer passengers, parcels and milk churns. The headquarters of the Portersfoote Bunting Light Rly. is in the red stone building on the platform beside the refreshment rooms, from which tea is piped beneath the tracks to the engine shed and workshops on the left. Water is drawn from the river by a waterwheel powered pump in the foreground, alongside the signalbox with its wooden walkway used by refreshment room staff for fishing. Through the arch behind the workshops are the walled kitchen garden and greenhouses of the Horticultural Dept, which provide produce for all the refreshment rooms on the line as well as hanging baskets for the stations. The manager's house and workers' cottages in Railway Terrace are beyond. Behind the station nameboard can be seen a sagging abandoned barn and adjoining former premises of Snippets Garden Twine Winding Works which later became the offices and garage of the Portersfoote Bunting Omnibus and Traction Co. On the opposite side of Station Rd. are the village hall and reading rooms, whilst the Sepia Foliate line hugs the side before cutting across the High St. at right angles and curving down Russets Lane. This railway describes a huge half circle before climbing past the row of trees top right to reach Blackthorn Edge station just out of sight around the bend of the hill. The line's ultimate destination is beyond the bracken covered wastes of Cuttle Common in the distance.