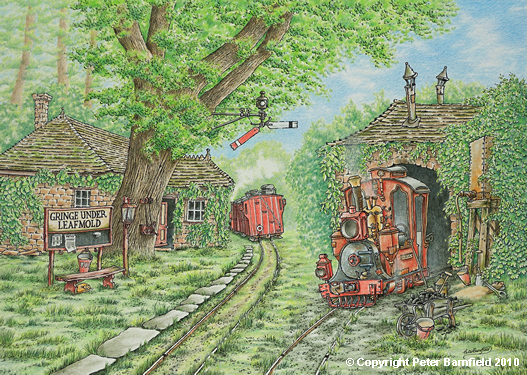 The PBLR's signwriter managed to correct the mis-spelling of Gringe, shown as Cringe in most official publications, but produced his own version of Leafmould. For a company that uses botanical names for its locomotives this is embarrassing to say the least. The buildings at this sylvan station, inherited from the old horse tramway, were converted to station, living accommodation and engine shed. With no local population the station sees few passengers, particularly as the PBLR actively discourages people from alighting here, fearing they will become hopelessly lost on the numerous overgrown woodland paths in the vicinity. It would seem that the only reason trains stop here is for the stationmaster's family to gain access to the outside world or to set down the crew of the engine which is stabled here when they arrive from Portersfoote Bunting each morning. This locomotive's job is to provide assistance for Quill-bound trains facing the steep climb from Marsh Marigold Jc. up to Quill Town station. The engine is fitted with specially enlarged sandboxes and is lit up early each morning, before the crew arrive, by the stationmaster or one of his many children.